This multi-part tutorial will demonstrate how to build a simple CRUD Ionic 3 and IBM Mobile Foundation Application. 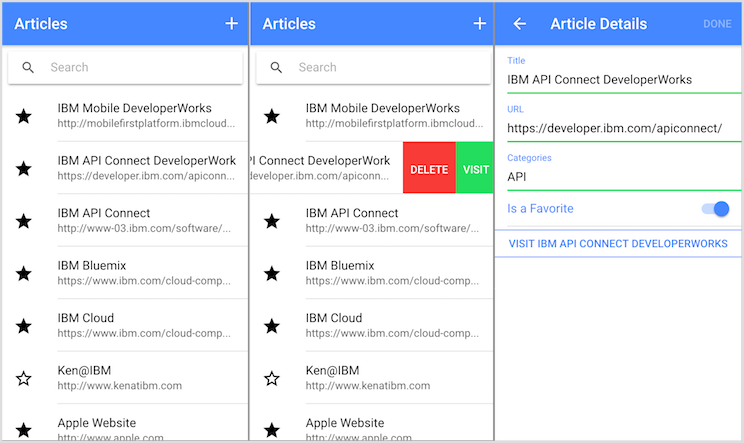 This section of the tutorial will cover the setup and installation of necessary software required for creating a mobile application using Ionic 3 and Mobile Foundation.

It is meant for someone who is just getting started developing Mobile Applications and wants to take a hybrid approach. That doesn’t mean there are not an valuable nuggets of information, however if you are an experienced developer and the required tools installed already, you can skip this part of the tutorial - although you will want to make sure have installed the Mobile Foundation Components.

Subsequent tutorials will cover the process of creating the application, see the introduction for more information.

What is needed for this Tutorial

To building a mobile application using Ionic 3 and Mobile Foundation you will need the following:

Software I have Installed

Check your installation to ensure that Java has been installed by opening a terminal or command prompt (if not already open) and type the following:

If you already have node or are unsure if you have node, open a terminal or command prompt and type node --version. If nodejs is installed, then you should see the version echoed back.

If you do not have nodejs installed, it is a fairly simple process. Open a browser and visit nodejs.org. On the front page is a button to download the LTS, or Long Term Support, version of nodejs.

Note: As of the time of writing this article LTS is for version 6.11.3.

After you have completed the installation steps for nodejs, you can confirm the installing by checking your nodejs version as mentioned above.

Installation of nodejs also includes the installation of node package manager (npm). npm is a software registery that contains millions of software products and components and is essential for installing Ionic Framework, Cordova and the Mobile Foundation Command Line Utility.

Git is one of the most widely used version control systems used today. The source that I provide throughout this tutorial will be available via Git. So if you run into trouble you can always pull from git to catch up.

Installing Git is as straightforward as installing nodejs. Visit the Git Download Site and download the appropriate version for your operating system. Follow the instructions to install.

Open a terminal or command prompt and type the following:

Note: You may need adminstrator permissions. Under Windows you will need to open the command prompt As Administrator. For a Mac or Unix, in the terminal session you would prefix the command with sudo. For example sudo npm install -g ionic.

The version of Ionic CLI that will be used for this tutorial is 3.12.0. To install this particular version you can type npm install -g ionic@3.12.0

What the -g parameter does is instructs npm to install the Ionic Command Line Utility such that it is accessible anywhere or globally.

Ionic Creator has recently been updated to support Ionic 3, however at the time of writing this tutorial it is still in an alpha release. You can read more about it on the Ionic Blog: Announcing Creator Ionic 3 support! (And what’s coming next).

Typically I will use Creator to create my screens with it’s WYSIWYG drag-drop interface. Then I create a project using the command line utility (CLI) as well use the CLI to create each of the pages. Once that is down, I download the project Ionic Creator to a temporary area, unzip it, and then copy over the HTML and CSS.

This process is a little more complex than simply downloading the project from Creator and using that project. But the reason I do that is because I like using the Lazy Page Loading. Lazy Page Loading helps with performance by only loading pages when they are needed.

There is a blog Upgrade to Ionic 3 Lazy Loading (With Script!) that you could use to update a project downloaded from Creator to generate the files necessary to use Lazy Page Loading. I have added it here simply as a reference.

As with the installation of Ionic , you will use npm to install Cordova. Cordova is the component that makes your app an app. It is a bridge between the device and the JavaScript/HTML you write your application with. Visit the Cordova site for an Architectural Overview of Cordova

To confirm that Cordova has been installed, go to your command prompt or terminal session and type:

Note: You may need adminstrator permissions. Under Windows you will need to open the command prompt As Administrator. For a Mac or Unix, in the terminal session you would prefix the command with sudo. For example sudo npm install -g cordova. In addition you could have installed Ionic and Cordova at the same time by typing sudo npm install -g ionic cordova

Typescript adds strong typing to Javascript. This feature and ECMAScript 6 (or ECMA-262/ECMAScript 2015 for you purists out there), in my opinion, are what makes Javascript a viable and effective programming language. Many editors now support Typescript including the editors mentioned below.

As with the installation of Ionic and Cordova, you will use npm to install Typescript.

To confirm that Typescript has been installed, go to your command prompt or terminal session and type:

Note: You may need adminstrator permissions. Under Windows you will need to open the command prompt As Administrator. For a Mac or Unix, in the terminal session you would prefix the command with sudo. For example sudo npm install -g typescript.

As with the installation of Ionic and Cordova, you will use npm to install the IBM Mobile Foundation Command Line Interface (CLI).

The CLI is updated on a fairly regular basis and you can confirm the latest available release by visiting the npm site for mfpdev-cli. At the time of writing this blog the current version of the CLI is 8.0.2017091111.

To confirm that the IBM Mobile Foundation Command Line Interface (CLI) has been installed, go to your command prompt or terminal session and type:

Note: You may need adminstrator permissions. Under Windows you will need to open the command prompt As Administrator. For a Mac or Unix, in the terminal session you would prefix the command with sudo. For example sudo npm install -g mfpdev-cli.

json-server is a tool that allows you to quickly mock up data as JSON documents and provides full REST support. What I like about it is that I can mock up my application data structures for developing my user interface without the need for creating a full-blown database. This is great for prototyping your application. I travel a lot and the server runs locally so I can always work on my app.

Again you will use npm to install the json-server

Hopefully you already have a favorite editor installed. But if you do not or would like to try something new, you can visit one or more of the following sites and follow the download/installation instructions.

To start the server, open a terminal or command prompt and navigate to the directory where the Mobile Foundation Developer Kit was installed.

For Mac and linux type

For Windows run the batch file (run.bat) by typing

Once the server is started, you will know that the server is ready when you see the line ‘The server mfp is ready to run a smarter planet.’, you can open the server console by opening a second terminal or command prompt and typing

This is a Mobile Foundation CLI command that will open the server console in your default browser. If you are shown a login page, the username and password are admin and admin respectively.

To verify the version of the server you are running, Click the Settings icon in the upper right corver of the page, then Click About.

NOTE: More of the Mobile Foundation CLI commands will be covered in future sections of the tutorial. However if you are interested in learning more about the commands now, you can type mfpdev help from a terminal or command prompt.

Maven is a build process management open source project managed by the Apache Foundation. Mobile Foundation uses Maven as the basis for building a deploying adapters. The Maven respository contains a number of Mobile Foundation projects that can be found here. The advantage of having adapters as Maven projects is that you can extend adapters to meet you specific needs such as creating an adapter for a third party product that is not supported.

Maven requires Java Development Kit 1.7 or above. You can review additional requirements here.

Once the download is complete, uncompress the archive and copy/move to an accessible location on your hard disk. Add the location of the Maven bin directory to your path and restart as necessary. Full instructions for installing Maven can be found here.

If you have a Mac, the easiest way to install Xcode is via tha App Store. Once you have installed Xcode you will also want to get an Apple Developer License so you can test using a device.

An alternative to using Xcode or as a supplement, you can install Android Studio by visiting the Android Studio Home page. Click the DOWNLOAD ANDROID STUDIO button. Once the download is complete start the installer and follow the instructions.

After the installation you will need to install sdks and configure emulator devices.

I like Google Chrome’s Debugging capabilities. I think the developer tools are hard to beat when building hybrid mobile and web based applications. Another very simple install as it is a download and install all in one. Visit https://www.google.com/chrome/browser/desktop/index.html and follow the instructions.

Next Up: The Article App